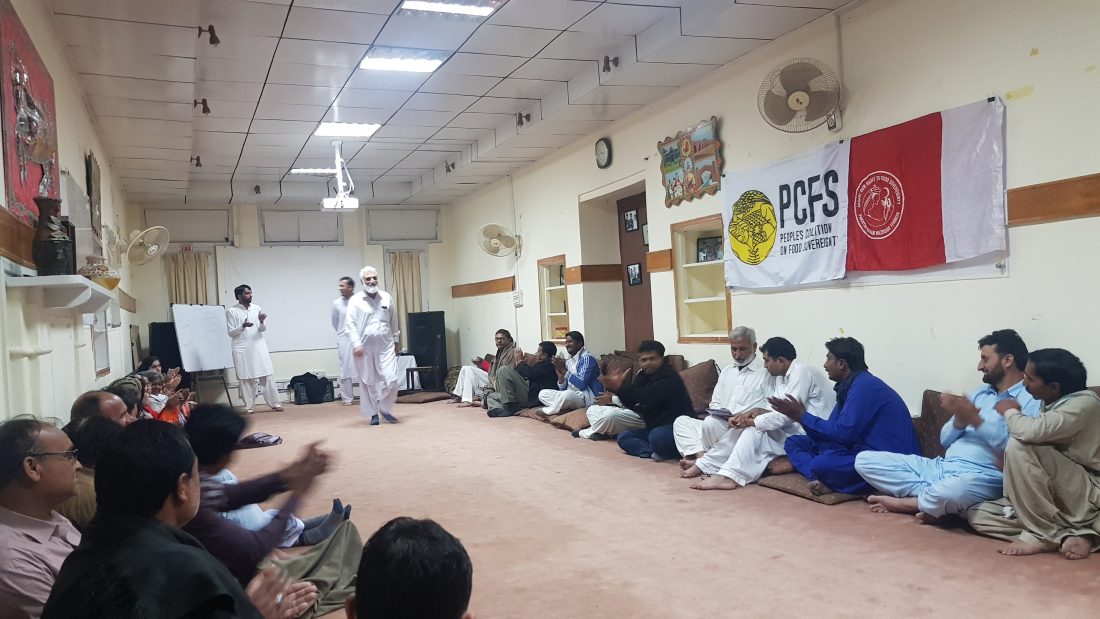 The increasing role of women and youth in the struggle for land and food was highlighted during the movement building workshop organized by the Peoples Coalition on Food Sovereignty (PCFS) and the PAN Asia Pacific (PANAP) together with Roots for Equity and Pakistan Kissan Mazdoor Tehreek (PKMT) in Pakistan last September.

“Sustaining a movement requires the vital participation of the youth and women in the front lines. Pakistan farmers and workers face very complex forms of exploitation and oppression. Struggling for genuine change requires mobilizing the strength of youth and women,” said Azra Sayeed, the executive director of Roots for Equity.

More than 20 farmer leaders from Sindh, Khyber Pakhtunkhwa, Punjab, and Islamabad participated in the three-day workshop. They shared key issues of landlessness, low wages, and poverty as the main drivers of rural poverty in the country. The organizations also noted how national policies impact farmers and indigenous peoples directly.

Roots for Equity and PKMT have been at the front for the struggle for the right to food and land in Pakistan for decades.

At the time, tens of thousands of farmers in rural communities were affected by a heatwave—exacerbating their already dire conditions. In South Punjab, failures of corn, cotton, and rice were forcing farmers to take high-interest loans. This is especially problematic for landless farmers renting land. Farmers demanded the rollback of the high prices of abiyana (water rate) and theka (lease). While campaigns for subsidies and loan write-offs moved forward, mutual help among farmers was being cultivated. In Khyber Pakhtunkwa, tomatoes had not yielded even half the expected amount, and farmers were going bankrupt. About half of corn crops in Sahiwal were just converted to silage to recover some loss.

Some farmers also said that the proliferation of hybrid and genetically modified seeds have decreased seed diversity, which leads to this onslaught of corn, cotton, and tomato seeds. At least four farmers in Lodhran, Punjab also died of poisoning from the insecticide sprays used in the field.

Pakistan remains one of the countries with a high incidence of rural poverty. Around 60% of the population still faces food insecurity, the majority of which are farmers and minorities. Recent reforms on taxation also threaten the already meager income of rural laborers. The government has recently lowered the tax exemption to 50,000 rupees (319.50 USD).

According to PKMT, even auxiliary income streams of farmers have recently taken a hit. The flood of leather products imported from China prompted the plunge in the prices of hides from 3,000 to 50,100 rupees (19 to 320 USD). The hides include those from cows, buffaloes, and goats.

This ties in with a pivotal concern raised during the workshop: the China Pakistan Economic Corridor (CPEC). It is a massive infrastructure program under China’s multi-billion Belt and Road Initiative. Previously, the organizations raised concerns on land grabbing for the construction of the Gwadar Port, as well as for various other projects being implmeneted under CPEC. PKMT noted that displacing historically fragile minorities residing in the area such as Thar, will only contribute to escalating conflicts in the region. There’s also increasing tension and militarization in farmer and minority communities in Kashmir.

PKMT also hit the government for evacuating numerous farmer communities in the Hattar area for a CPEC special economic zone. In Peshawar, the construction of the Northern Bypass Project resulted in the arrest of farmers resisting the landgrab.

“It’s obvious that the projects under CPEC are outright landgrabbing of farmers’ lands and displacement of rural communities,” Haider added.

While the workshop facilitated an exchange of experiences and struggles, a crucial point was the increasing efforts of both PKMT and Roots for Equity to train and mobilize women and youth in their organizing areas.

“Women are adversely affected by rural poverty as they shoulder half the responsibilities, if not more, in the upkeep of the family,” Sayeed said.

Young participants, mostly women, led the reporting and synthesis workshop. They highlighted the lessons in organizing and mobilizing women and youth in the villages, as well as specific issues that affect the sectors. The workshop also highlighted the need for deeper research initiatives into the themes and topics that emerged within the sessions.

“The fight for food and land is a fight for our future, that’s why the youth are the torchbearers of this movement,” Azra concluded. ###

(Written by JC Mercado of the PCFS Global Secretariat)