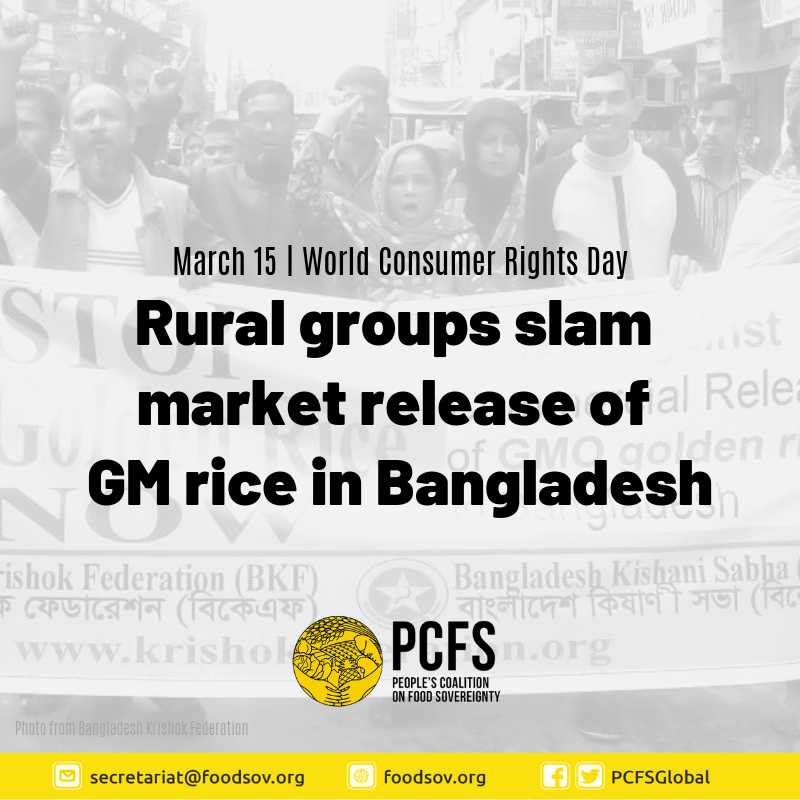 International and local farmers’ organizations decry the Bangladesh government for supporting the commercialization of the genetically modified Golden Rice, which is claimed to address Vitamin A deficiency (VAD) in underdeveloped countries.

According to news reports a month ago, Agriculture Minister Dr. Abdur Razzak confirmed that the Ministry of Environment will soon release production clearance for the golden rice. The Ministry of Agriculture has also been active in interacting with the developers of the golden rice – the Bangladesh Rice Research Institute and International Rice Research Institute – the latest of which was the stakeholder workshop held in Dhaka last Mar. 6.

Protests have taken place in Dhaka, Barisal, and Gopalganj in February since the announcement. Led by the Bangladesh Krishok Federation (BKF) and Labour Resource Center (LRC), Bangla farmers contend that the commercialization of Golden Rice will destroy local rice varieties and consumption of the GM rice poses serious risks to health and the environment.

“Golden rice will result in extreme damage to agriculture in Bangladesh. Farmers will lose their sovereignty over traditional seeds,” according to LRC.

The farmers cited their experience with BT-Brinjal (eggplant), which required them to spend more through the repeated purchase of its seeds and chemical inputs every farming season.

They also disputed the claim that Golden Rice is the solution to VAD. They said it is just mere propaganda to capture the seed market in agricultural countries like Bangladesh.

“Proponents are using Golden Rice not as solution to micronutrient deficiency, but as a marketing tool for other GMOs that will only benefit the agrochemical companies that develop them,” said Cris Panerio, lead convenor of the Stop Golden Rice Network (SGRN). “Promoted as a ‘humanitarian’ project, Golden Rice will try to condition the acceptance of the people to unsafe and unnecessary crops.”

According to the People’s Coalition on Food Sovereignty (PCFS), a global network of various grassroots groups of small food producers and food sovereignty advocates, commercializing golden rice in Bangladesh will pave the way to its market release in the Philippines and Indonesia, as well as other GM crops in target countries.

“Transnational corporations (TNCs) are behind the railroading of the golden rice commercialization. The of the Golden Rice project – particularly ChemChina-Syngenta, the patent owner – have been aggressive in its ploys to hasten golden rice’s market release,” said PCFS global co-chairperson Sylvia Mallari.

Mallari was referring to the food safety approvals from Canada, US, Australia and New Zealand, and the 2019-2023 “Biofortification Strategy” of CGIAR – the largest global research network on agriculture.

“Biofortification is a business strategy, not a solution to global malnutrition. It is not that staple foods in developing nations are deficient of nutrients; rather, TNCs have kept the income of rural peoples too low through price cartels and monopoly control of food production and distribution,” Mallari said.

“GM crops in the market will only worsen import dependence and export orientation of agriculture especially in underdeveloped countries, which entail further impoverishment of the rural peoples,” the PCFS official added.

“On World Consumer Rights Day, we call the rural peoples of the world to stand against the domination of TNCs on our agriculture and food systems. Stop Golden Rice!”

BKF and LRC are member organizations of PCFS. The three formations are part of the global SGRN. ###