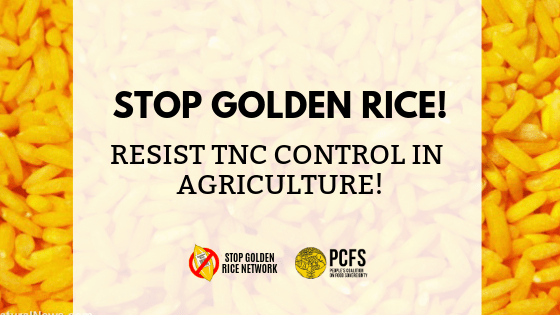 An international movement of grassroots groups of small food producers and food sovereignty advocates challenged the Chinese government to reconsider its thrust to invest in agricultural biotechnology and take a more pro-active role in regulating GMO projects under its charge.

In particular, China should be wary of agrochemical Swiss giant Syngenta’s Golden Rice project, according to the People’s Coalition on Food Sovereignty (PCFS).

Golden Rice is the beta-carotene biofortified rice through genetic modification, which is claimed to help resolve Vitamin A deficiency in developing countries where rice is a staple food. In 2017, Chinese state-owned enterprise ChemChina acquired Syngenta, patent-holder of the Golden Rice, for USD 43 billion.

“Golden Rice is front lining China’s target to make breakthroughs in GM research by 2020. However, Syngenta’s track record of deception is more likely to cause disasters than breakthroughs. China should also take into consideration that it is actually a major potential market for the Golden Rice,” said Sylvia Mallari, global co-chairperson of PCFS.

Mallari cited the unethical feed testing of the Golden Rice to Chinese children, which stirred an uproar in China in 2013. She also mentioned the premature sale and marketing of Syngenta’s Agrisure Viptera and Duracade corn seeds in China. These were sold in 2010 and 2013 without import approval from the Chinese government. In December 2018, the Federal Court in Kansas, USA ruled to approve the USD 1.5 billion in compensation to affected US farmers.

Meanwhile, the consumption of GM crops remains a debate in China. Earlier this year, however, the government has opened its market to more GM crops – canola, corn, and soybean. China is a major importer of grains especially soybean.

According to Mallari, “Despite China’s experience with Syngenta, it has opted to take it over being one of the ‘Big Four’ agribusiness giants toward market monopolization through the exploitation of agricultural biotechnology. This was met with backlash from within China and other affected counties.”

Mallari said farmers and consumers groups particularly in Bangladesh, Philippines, and Indonesia held a “global day of action” on August 8, 2019 against the railroading of Golden Rice’s commercialization in these countries. PCFS is a member of the Stop Golden Rice Network (SGRN), which spearheaded the commemoration of the uprooting of field-tested Golden Rice crops in Pili, Camarines Sur, Philippines by over 400 Filipino farmers and consumers in 2013.

Faremer-Scientist Partnership for Development (MASIPAG) and Peasant Movement of the Philippines (KMP) led actions in three provinces in the Philippines including the lobbying in Munoz City, Nueva Ecija to call for the revocation of Golden Rice field tests. In Bangladesh, the Bangladesh Krishok Federation organized a discussion-meeting on the dangers of Golden Rice while the Labour Resource Center formed a human chain in protest. Bina Desa and GRAIN, meanwhile, held a public forum in Jakarta, Indonesia. The Ponlok Khmer and the Coalition of Cambodian Farmers Communities also expressed their solidarity through social media. These organizations are members and networks of PCFS and of SGRN.

The Bangladesh government has expressed its intention to commercialize the GM rice before the year ends, while field trials in the Philippines are ongoing. Last year, it has already secured food safety approvals in Canada, Australia and New Zealand, as well as in the US.

“In reality, Golden Rice is pointless. Its beta carotene content is not even sufficient in delivering its grand promise of ending Vitamin A deficiency,” said the PCFS official, citing the food safety approvals already secured by ChemChina-Syngenta. She also shared a recent study in India that proved the vitamin content of Golden Rice easily degrades if it is not stored properly, which would mean greater expenses for farmers in procuring the necessary storage equipment.

Mallari added that Vitamin A can easily be sourced from readily available and affordable fruits and vegetables. “The Golden Rice is such an unnecessary technology. Resources used for its development should be channeled to the betterment of poor farmers who already produce these Vitamin A-rich food,” she said.

Razan Zuayter, PCFS global co-chairperson, said the Golden Rice will set precedence to the development and commercialization of more biofortified GM rice varieties such as the high-iron and high-zinc rice that the International Rice Research Institute is already working on since 2015.

“These agribusiness corporations are painting themselves as benevolent saviors from malnutrition through GM food, when in fact the countries in concern are new markets to further their profit. Aside from South and Southeast Asia, these GM crops will be sold and fed in Africa,” added Zuayter.

“PCFS reiterates that Golden Rice, like other GM crops, will only bring harm to the livelihood of farmers and the health of consumers. As long as biofortification primarily fulfills business interests, grassroots rural peoples groups will continue to protest against such technologies that in no way serves our genuine welfare,” Zuayter added.

“All these in picture, China should know better. It should heed the call of the rural peoples of the world to stop Golden Rice!” Mallari concluded. ###