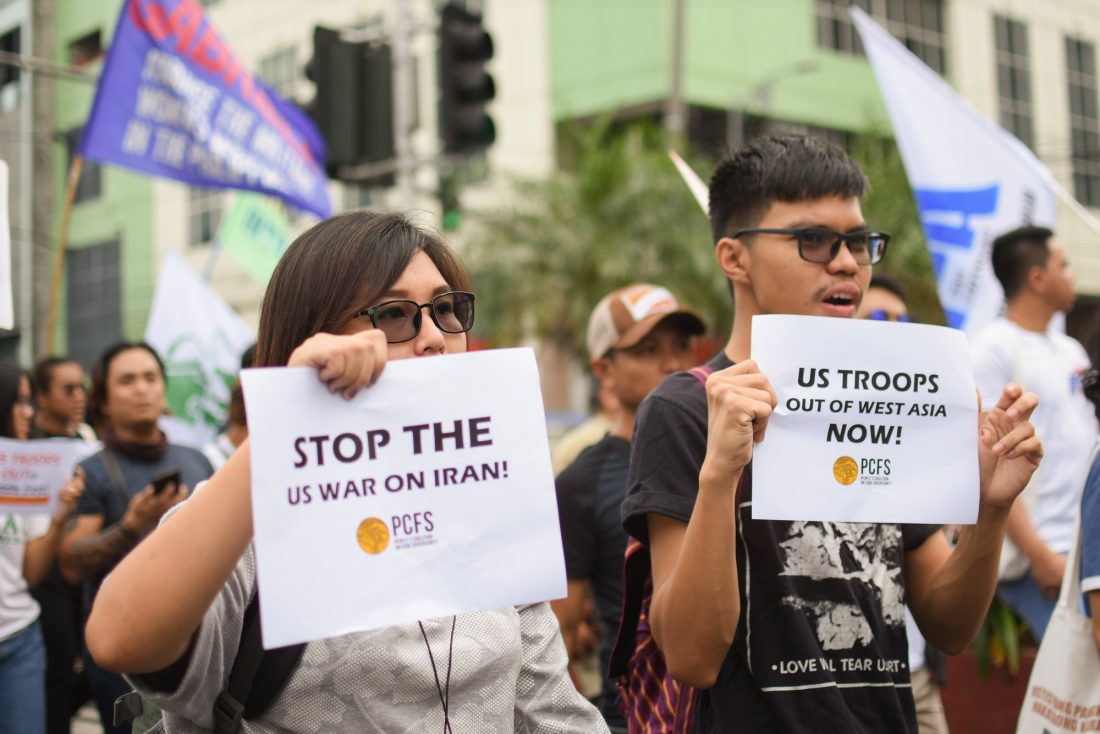 We express our solidarity with the Iranian people and the world in denouncing the escalating US aggression against Iran and in the whole of West Asia. We issue these calls in support of the global call to stop the US war on Iran, a step forward toward achieving a just and lasting peace in West Asia.

We stand with the people of Iran and West Asia against US President Donald Trump’s hostility to provoke Iran into this senseless war.  The Iranian people have been storming the streets in the past months amid deteriorating living conditions due to US-imposed sanctions and the rising US-Iran tension. Despite all lives lost and at-risk – being caught in the crossfire and crackdown – they continue to protest the austerity-driven economic crisis, political repression, and the looming full-blown war. We are not fooled by Trump’s hypocritical “solidarity” to the Iranian protesters, taking advantage of the people’s unrest to forward the US war agenda.

We condemn the US government for instigating an all-out war in West Asia and painting Iran as the terrorist provocateur. Trump’s defining orders the airstrike that massacred ten including high-profile generals Qasem Soleimani of Iran and Abu Mahdi al-Muhandi of Iraq, as well as the “maximum pressure” campaign against Iran that caused inflation of unprecedented heights – were geared to compel a war involving the whole of West Asia with Iran as flashpoint. The US even made claims and invented “fake news” to justify its war on Iran, in the same manner that it did to spark the Vietnam War.

Historically, the US has been bullying Iran for decades. Since the victory of the 1979 Iranian revolution that installed its independent sovereign state, the US has subjected Iran with proxy wars, military offensives, and economic sanctions to cripple its economy and curb its influence over West Asia. These undermined the Iranian people’s food sovereignty – denying them their right to food and to produce food.

We deplore Trump for promoting conflict in West Asia in the interest of saving its ailing economy and pleasing its allies in the region, especially Israel and Saudi Arabia. Conspicuously, the stock prices of US arms companies soared after the controversial US airstrike that opened the decade. Indeed, war is a lucrative opportunity for the arms industry largely dominated by US companies, and it rationalizes governments’ multibillion-dollar military budget for modernization. It is also a means for the US and its oil-producing allies in West Asia to consolidate their power in the region and take over their adversaries’ oil reserves.

We demand to stop the militarization in West Asia and to immediately pull out US troops. The US, as the ringleader of the proxy wars and occupations in West Asia, should stop meddling in the affairs of the region.

We appeal to the government of Iran to channel its efforts in addressing the food shortages, poor public services, rising prices, and widespread unemployment in the country – all of which are legitimate demands of the Iranian people.

The US and its allies should also be held accountable for the war crime of starvation that has caused famine especially in Yemen, Syria, and Sudan – countries aligned with Iran. This man-made food crisis affects about 34 million people in West Asia, and they are the casualties of the inhumane weaponization of food and aid prompted by US aggression.

STOP THE US WAR ON IRAN!

RESIST US AGGRESSION IN WEST ASIA!

US TROOPS OUT OF WEST ASIA NOW!

Endorsed by the following formations:

Arab Group for the Protection of Nature (APN)

Hawa Society for Women in Sudan