With vigor of the youth, intensify the struggle for land and life! | DAY OF THE LANDLESS 2018 #NoLandNoLife 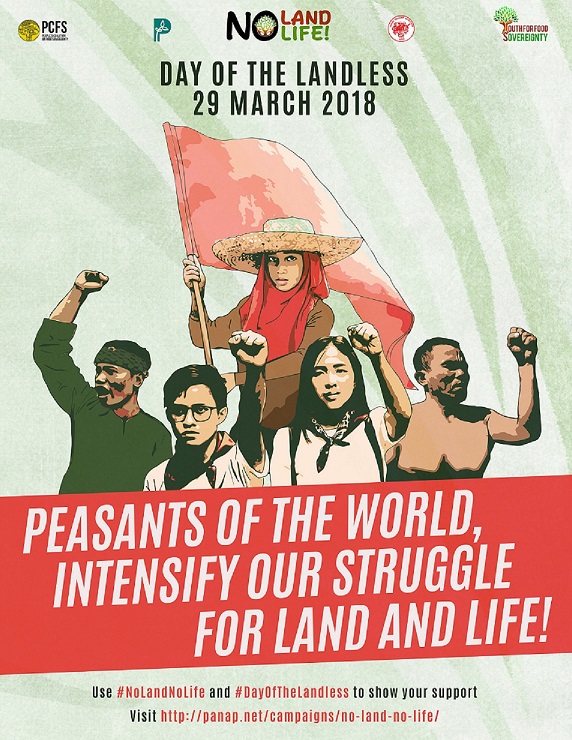 Joint statement endorsed by 67 international, regional and national organizations to mark the “Day of the Landless”

We mark the Day of the Landless this year amid ever pervasive landlessness and land grabbing, driven by the competition of global powers and local elites to control the world’s resources at the expense of small food producers and the food sovereignty of poor countries. This is accompanied by rising militarism and violent repression of rural communities. Among those worst affected by deepening poverty and hunger as well as increasing human rights violations are the rural youth.

But we face these challenges with even greater resolve and optimism as we look forward to the energy and renewed commitment of the youth to help defend the rural people’s right to land and life.

Land is the central aspect of rural life and society. But the increasing commodification of land amid relentless neoliberal onslaught, tightening corporate and monopoly control over agriculture, and the lack of genuine agrarian reform that ensures the people’s right to land and adequately supported by the state, are threatening rural peoples’ access to and control over land and natural resources. Global and regional developments, including the continuing global financial and economic crises and unrelenting push to further liberalize agriculture, the emergence of new economic powers hungry for new markets of surplus capital and products and sources of raw materials, and the rise of fascists and authoritarian governments, are also creating conditions for the ever intensifying unrest and conflicts in the rural areas.

China’s aggressive expansion through its enormous US$890-billion Belt and Road Initiative (BRI), for instance, is dispossessing and displacing farming, fishing, indigenous, and other traditional communities all over the world. The BRI, dubbed as the “only large-scale multilateral development project in the 21st century,” involves 65 countries with 900 ongoing and planned infrastructure projects stretching from the Pacific to western Asia, and all the way to Africa and Europe.

According to the Land Matrix, an independent initiative monitoring land deals, 26.7 million hectares of agricultural land worldwide have been transferred into the hands of foreign investors since 2000. China was able to acquire 2.23 million hectares of them in the period 2000-2014 alone. And this was even before the BRI gained ground.

Meanwhile, multilateral financial institutions such as the Asian Development Bank (ADB) and the World Bank, working with corrupt politicians and foreign investors, continue to fund and implement programs and projects that result in the massive dislocation and marginalization of rural communities. Infrastructure development, including through public-private partnership (PPP), for transportation, energy, and economic zones, among others, are grabbing away or destroying vast tracts of lands and other agricultural resources.

The competition for agricultural land and resources is happening amid the intensified militarism of the world’s powers led by the US. Its pivot to Asia to contain China’s rise has meant, among others, increased support to militaries in the region, long notorious for their human rights atrocities. They have been waging wars and counterinsurgency campaigns that often target rural communities, including those that are embroiled in land conflicts with governments and corporations. This has resulted in increased repression and human rights abuses in the rural areas.

The growing threats to access to and control over land and natural resources not only perpetuate but worsen the vicious cycle of underdevelopment in the rural areas and the poverty and hunger among rural peoples. According to the Food and Agriculture Organization (FAO) of the United Nations (UN), more than 80% of the world’s extreme poor live in the rural areas, and 65% work in agriculture. Around half of those living in extreme poverty are under the age of 18.

The state of the rural youth

The rural youth – which make up 55% of the global youth population – traditionally already suffer from limited access to basic services such as education, health and shelter, as well as to opportunities in terms of livelihood. In general, the youth are two to three times more likely than adults to be unemployed, according to a joint report of the World Bank and International Fund for Agricultural Development (IFAD). Official unemployment rate among the rural youth ranges from 7.5% in Sub-Saharan Africa; Asia, 8.1%; Eastern Europe and Central Asia, 19.7%; Latin America and the Caribbean, 21%; to 22.8% in the Middle East and North Africa.

When the rural youth do find employment, majority are in the informal economy and engaged in household-based and agriculture-related activities such as family workers, subsistence farmers, home-based micro-entrepreneurs, or unskilled workers. They earn very low wages and often face unsafe and exploitative working conditions. Young rural women experience worse, as they also suffer traditional gender-based stereotypes and gender-based division of labor.

The worsening situation of rural communities are forcing the rural youth into labor migration. The youth account for the bulk of migration flows: FAO data shows that 15-34 years old account for one third of all international migrants. The rural youth however, are “most likely to migrate in response to the lack of gainful employment and entrepreneurial opportunities in agriculture and related rural economic activities.”

At the heart of this lack of opportunity to be economically productive is the chronic and prevalent landlessness in the rural areas, made even worse by land and resource grabbing.

Fighting back with a strong youth movement

To defend the right to land and livelihood as well as to protect the way of living of their communities, many young farmers and indigenous people have been at the forefront of the struggle to stop land and resource grabbing, promote food sovereignty and advance genuine agrarian reform. This is despite the intensifying repression of rural communities to pave the way for large-scale corporate agriculture and profit-oriented mega infrastructure projects that saw 166 killed and 342 arrested and detained in the past 14 months due to land conflicts and struggles, including young farmers, farm workers, indigenous people and activists, based on PAN Asia Pacific’s (PANAP) monitoring.

Thus, we welcome with enthusiasm and excitement the first general assembly of the Youth for Food Sovereignty (YFS) on March 30 to April 2. The YFS is an international network of youth organizations that promotes food sovereignty and supports the peasant struggle for genuine agrarian reform as well as the indigenous people’s assertion of their right to their ancestral lands. We strongly support the YFS’s assembly that aims to highlight the plight and struggles of the rural youth, as well as to “enlist the vigor of the youth in the peasants’ intensifying struggle for land and life.”

The future belongs to the youth, and they will help forge today this future where land truly belongs to those who till and enrich the land for the benefit of the people and the planet, and not just for profits of the few.

With the vigor of the youth, we commit to intensify our struggle for land and life!

2 comments on “With vigor of the youth, intensify the struggle for land and life! | DAY OF THE LANDLESS 2018 #NoLandNoLife”