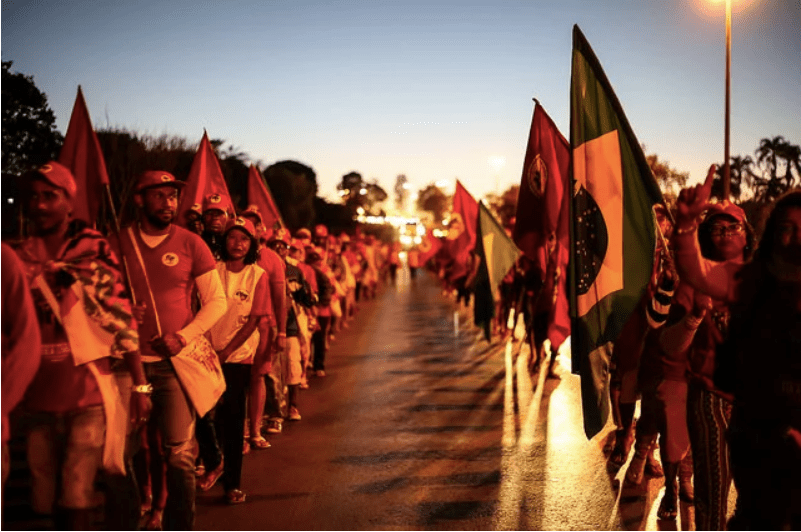 A statement on Jair Bolsonaro’s ascent as Brazil’s PM

We, the Peoples’ Coalition on Food Sovereignty, condemn in the highest possible terms the recent attacks of the Bolsonaro regime to Brazilian farmers and indigenous peoples. We also extend our raised fist in solidarity to the Landless Farmers Movement (MST), the League of Poor Peasants (LCP) and the Brazilian people in their fight against the looming fascism of Jair Bolsonaro.

Just weeks after the elections, around 450 families are facing eviction in Quilombo Campo Grande Camp, as an unfair and arbitrary court decision forces them to vacate their community including around 1,800 hectares of productive land they have cultivated for years.

In numerous interviews and statements, the newly elected president have singled out MST and the farmers’ movement as “threats to the public” and has to be “cleaned up” as “[they] do not respect the law”. This has prompt his supporters and state actors to unleash the harshest attacks on landless farmers. Flurries of hate speech and threats of jailing “red farmers” and supporters, pepper Bolsonaro’s media presence almost everyday since elections.

Recently, an MST led encampment of landless farmers in Mato Grosso do Sul was attacked by a group shouting the name of Bolsonaro and burned one of their huts down. This harrassment just goes to show the inflammatory influence of Bolsonaro’s threats.

As if not enough, allies of the homophobe and racist Jair Bolsonaro are currently pushing an anti-terrorism bill in senate targeting social movements and tagging “any action against the government” including protests as terrorism.

Why is Bolsonaro targeting the landless farmers and indigenous people?

The Bolsonaro regime represents the rise of the most reactionary section of Brazilian landlords and agro-corporation compradors, security forces, and evangelical churches under their parliamentary front known as the Bancada BBB – beef, bullets, bible. While it is no secret that this group donated to Bolsonaro’s election kitty, the most organized and largest of this group are ranchers and landlord ruralistas represented by the Parliamentary Front of Agriculture – the largest agribusiness lobby group in Brazil.

For decades, the PFA, often head to head with MST, have lobbied for neoliberal policies towards liberalization of agriculture, further commercialization of land markets, and most horrid of all, the cessation if not roll back of land reform programs and right to land of farmers and indigenous peoples in Brazil.

Active participation of landless farmers has always been the biggest obstacle for the PFA agenda. In one case, MST farmers have occupied the large plantations and estates of PFA-affiliated officials including a 479 hectare soy farm owned by the Amaggi Group of Brazilian agriculture minister and King of Soy Blairo Maggi.

Indigenous peoples’ right to lands in the Amazon are under fire as Bolsonaro made clear statements on ending titling of ancestral lands and industrializing lands in the world’s last lungs for mining and agribusiness interests. In fact, the Bolsonaro effect alone before elections have accelerated deforestation of the Amazon rainforest by 36%.

Despite condemnation, Bolsonaro had made it clear where he stands on the agrarian question. In fact, he recently appointed PFA’s Tereza Cristina da Costa Dias as agriculture minister. This unprecedented power of bancada ruralistas through the Bolsonaro regime spells intensified landgrabbing, en masse eviction of farmers and rural peoples, and growing human rights violations against farmers and indigenous communities.

As it is, Brazil has been the most dangerous country in the world to farmers, land and environmental defenders. According to Global Witness, 57 land rights activists were killed in Brazil last year alone. In fact, agribusiness and mining interests amassed the most of these cold blood murders last year – the very sectors Bolsonaro are now representing.

Historically, fascism has always been anti-farmer, anti-poor, anti-environment and anti-people wherever it rears its ugly head. The Bolsonaro regime is but the latest in addition to the indisputable rise of right-wing fascists inclined to implement neoliberal policies under a strongman banner. In less than a month, Bolsonaro has shown itself in league with other contemporary fascists in praising Trump and previous dictatorships in Latin America.

Fortunately, landless farmers and indigenous peoples’ movement in Brazil are tempered with the historical experience of valiantly standing up to fascism and struggling against foreign encroachment and local reaction.

For decades, the unwavering march of landless farmers and agricultural workers’ movement in Brazil have pushed social justice through distributive land reformed enforced by collective action. Under the banner of MST and other groups like LCP, Brazilian farmers have inspired countless rural movements in Latin America, Asia, and Africa to storm the heavens and fight for land, justice and food sovereignty.

We extend our utmost support to the fearless farmers and indigenous peoples of Brazil in the fight against fascism and reaction. We call upon all our members and allies to lend our hands to the Brazilian rural peoples in their fight for democracy, land, and food sovereignty. ###