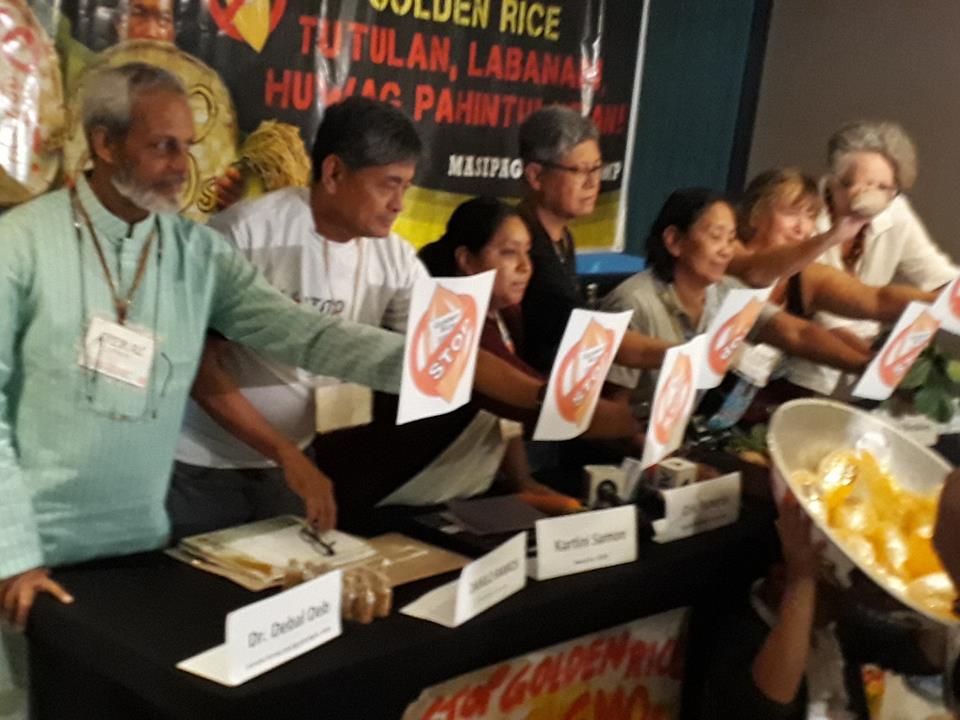 We, the Peoples’ Coalition for Food Sovereignty and all our members and networks, are one with the Stop Golden Rice Network in claiming this day – August 8 – as the Global Day of Action against Golden Rice. As an international rural peoples’ movement committed to assert the peoples’ right to food, we reiterate our utter disgust and condemnation to Syngenta-ChemChina’s efforts to pose their Golden Rice project as a “humanitarian service” to cloak their corporate agenda of further cornering seed markets and profiteering from farmers through it.

As we speak, Syngenta-ChemChina is leading the charge of the Big 4 – Syngenta-ChemChina, Dow-Dupont, Bayer-Monsanto, and BASF – in consolidating the seed and pesticide market through the Golden Rice initiative. Governments and intergovernmental institutions have been lauding Syngenta for “serving humanity a viable solution to Vitamin A Deficiency” and “paving the way for a responsive agriculture that caters to peoples’ needs.”

But not us. We won’t be duped. Small farmers and rural peoples around the globe are standing up today to expose the new frontrunner of the agrochem TNCs – Syngenta.

After the USD 43 billion merger acquisition of ChemChina to Syngenta, it rose to the top of the agrochem TNC kingpins – cornering 23.8 percent or USD 12.77M of the global agrochemical sales in 2017. The Big 4 altogether control 76 percent of the global seed and pesticides market and 70.7 percent of the total global agrochemical sales. Throughout the decade, these mergers and acquisitions jacked up the price of commercial seeds to unprecedented levels, encroached on if not criminalized local food production, all for the sole purpose of expanding profit, and fueled land grabbing, environmental destruction and loss of seed biodiversity.

This is why governments of the Philippines and Bangladesh have been sweeping complaints and concerns against the Golden Rice field trials under the rug, at the expense of the small farmers and rural peoples – Syngenta is a very large TNC and it funds the GR initiative well, additionally cloaking it with “humanitarian purposes.”

And now we hear the news of another genetically-modified rice claiming to be an “affordable” option to “neutralize” HIV, albeit as a topical solution. This is yet another initiative with a premise detached from the profit-driven agro-chem dominated reality of our food and agriculture systems. Especially in Africa, where 70 percent of people living with HIVs come from, and whose countries are among the poorest and most underdeveloped, it is far unlikely for the people to produce this GM rice at almost no cost once corporate interests take the helm of its development and commercialization. The Golden Rice experience is more than enough proof.

As our farmers wallow in landlessness, poverty, and environmental degradation, we cannot stand idly by and join in the chorus of praising the wolf in sheep’s clothing. There is nothing humanitarian about Golden Rice – only farmers’ demise, impoverishment, and ruin. Stop Golden Rice now! ###