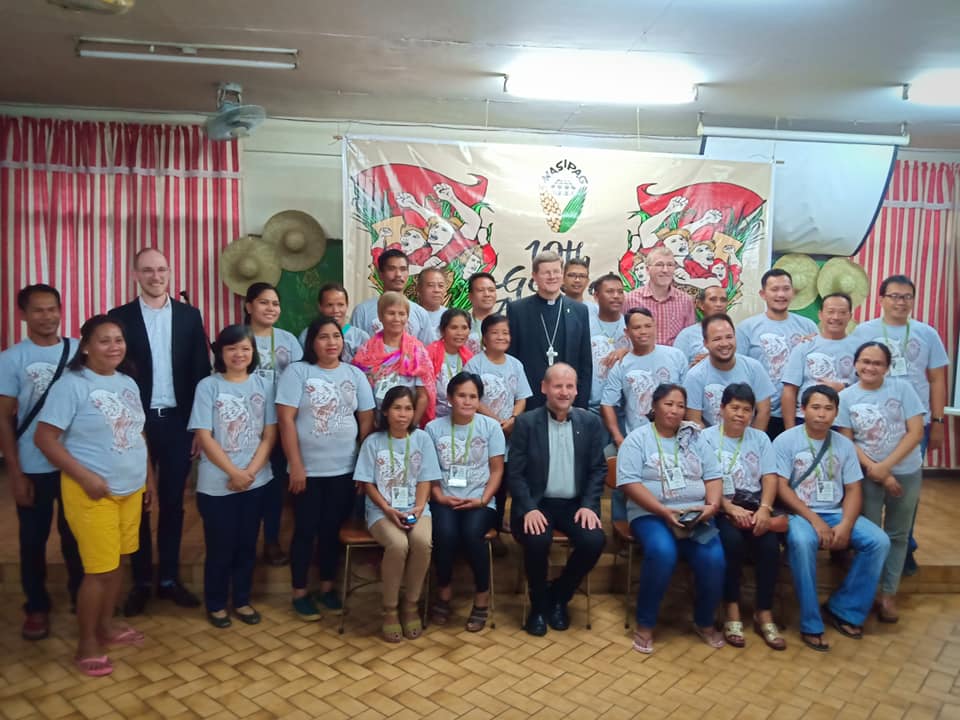 We, the Peoples Coalition on Food Sovereignty (PCFS), on behalf of our members and networks across the globe, representing more than 200 organizations, congratulates Magsasaka At Siyentipiko Para Sa Pag-Unlad Ng Agrikultura (MASIPAG), its board members, secretariat and staff, members, the hundreds of farmer organizations and tens of thousands of farmers it works with on this day, on its 10th General Assembly.

We are indeed in a worsening global crisis in agriculture. First, the constant retooling of imperialist nations to further capture and maximize profit off of global agriculture, land, and food is becoming more and more pronounced in a tighter and tighter cycle as the end of the current global economic crisis is
nowhere in sight.

Financialization of agriculture, coupled with an-ever consolidating monopoly of a handful of transnational companies in agricultural markets, have secured the control and siphoning of profits to a small number of billionaires. Decades of neoliberal policies on trade liberalization, deregulation of agricultural, land and food production and trade, and privatization of support services have paved the way for this corporate capture.

This has resulted in massive and global peasant ruin as agrochemical TNCs, institutional investors, financers, insurers, and supply chain operators are pocketing more and more of the producers’ income.

Second, motivated by rising prices of food and fuel, landgrabbing has not only continued but has developed in a much larger scale, more intense, and, in many cases, more violent.

Third, the rampant peasant killings, violent displacement of farming and indigenous people’s villages, and the widescale human rights violations to rural peoples around the world in the name of ‘food security’, ‘rural development’, and false climate change solutions being done under transnational deals show that the crisis is far from over.

But as seeds grow stronger in roughly plowed lands, the peasant movement and its rural allies offers us hope amid this crisis – the road of resistance, the road of solidarity.

In the Philippines, the deadliest country for farmers in Asia, second in the world, farmers are reclaiming their lands, their rights, and their future through militant collective action and sustainable agricultural production.

It is through this lens that we want to frame our appreciation of the works of MASIPAG – as a network born of farmers’ aspiration for social change and collective action.

MASIPAG remains at the forefront of developing a farmer-led, pro-poor, pro-people and open source crop science research, especially rice. In doing so, MASIPAG is currently a stalwart of alternative and people-centered agricultural research.

We also laud MASIPAG in bringing science back to the hands of the producers as their tools in the struggle for production of safe, accessible, and sustainable food. At a time where science is being used to further subverse agriculture to monopoly control, MASIPAG has shown that genuine peasant-scientist partnership is not only possible but necessary in developing sustainable agriculture and attaining food sovereignty.

We have much to learn from MASIPAG in its more than a three decade of service and solidarity, not only to the Filipino farmers, but to the struggling rural peoples of the world. As of today, MASIPAG remains the gold standard in peasant-scientist partnership all over the Global South.

We look forward in continuing to work alongside MASIPAG in our struggle for land, food, and food sovereignty.

(MASIPAG is a farmer-led network of people’s organizations, NGOs and scientists working towards the sustainable use and management of biodiversity through farmers’ control of genetic and biological resources, agricultural production and associated knowledge. It is a member organization of PCFS from the Philippines.)