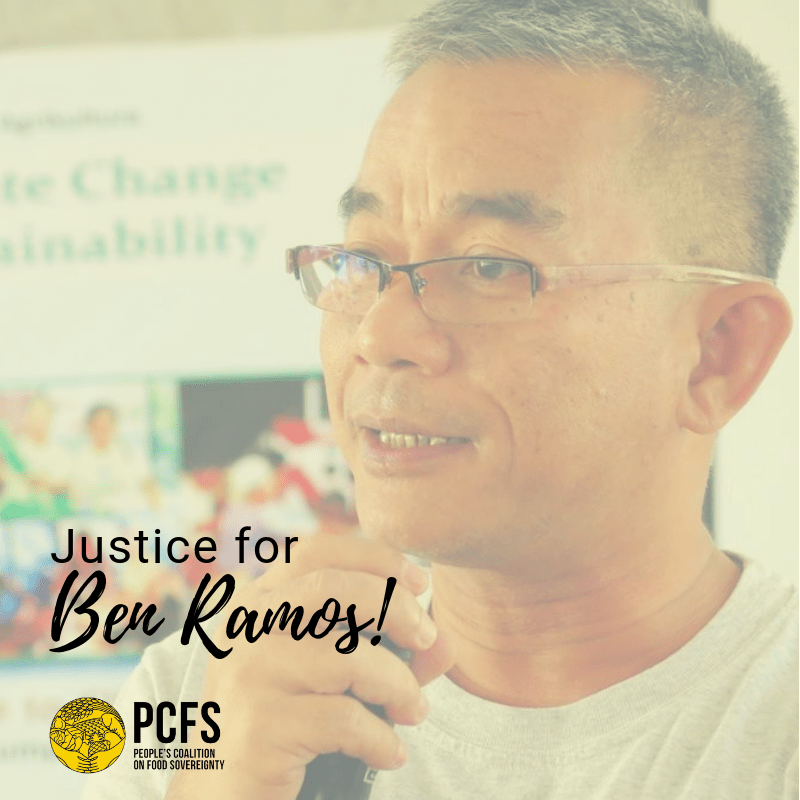 PCFS denounces the alleged state-perpetrated killing of people’s lawyer and farmers’ rights defender Benjamin Ramos. He is the latest addition to the growing list of political killings in the Philippines – the 34th lawyer – under the administration of President Rodrigo Duterte.

The Coalition believes that his killing is part of the government’s efforts to cover up its reported accountability in various human rights violations in the country, recent of which is the massacre of Sagay 9 – the farmworkers slain last Oct. 20 at the Hacienda Nene sugar plantation in Sagay City, Negros Occidental. He was the legal counsel assisting the victims’ families. His death is an indication of the escalating impunity in the Philippines.

Prior to his murder, the military included Ramos in a list of personalities alleged to be communist rebels operating in the province. Red tagging is commonly used to seemingly justify the extrajudicial killings of the country’s many rights defenders. This has to stop.

Ramos was a founding member of the Visayas regional unit of farmer-scientist group MASIPAG, a member organization of PCFS in the Philippines, and was also a member of its Board of Trustees for almost two decades until 2016. He was the secretary-general of the Negros province chapter of independent lawyers group National Union of People’s Lawyers (NUPL).

PCFS grieves the loss of yet another dedicated people’s lawyer and food sovereignty advocate. We laud Ramos for all the years he had spent serving the rural poor, advancing farmer-led development, endorsing sustainable and organic agriculture, and promoting people’s food sovereignty.