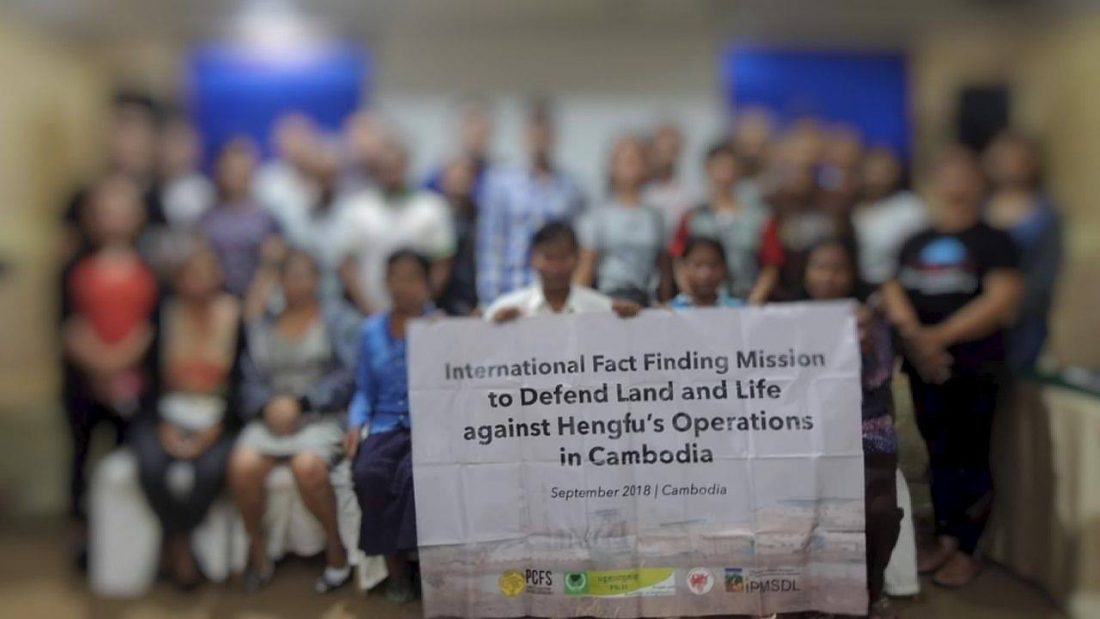 International groups submitted to the United Nations (UN) officials the results of an independent international fact-finding mission in Cambodia that found local and national authorities facilitating the land grabbing of a Chinese company in Preah Vihear province.

The groups, which organized the “International Fact-Finding Mission to Defend Land and Life against Hengfu’s Operations in Cambodia,” are asking the intervention of UN Special Rapporteur on the right to food Hilal Elver and Food and Agriculture Organization of the UN (FAO) director general Jose Graziano de Silva on the land grabbing of more than 13,000hectares by Chinese concessionaire Hengfu Group Sugar Co., Ltd. The mission’s executive summary was submitted to them on Oct. 13, 2018 during the first day of the Civil Society Mechanism (CSM) Annual Forum of the United Nations Committee on World Food Security, which will hold its 45th plenary session in Rome, Italy on Oct. 15-19, 2018.

In its findings, the mission alleged that Hengfu is conniving with the government to pacify the resistance of the affected communities and to expand its operations over the disputed lands. The Chinese firm carries out various schemes to do so, most rampant of which are intimidation and harassment.

According to the mission, human rights violations experienced by the villagers are mostly state-perpetrated in order to protect the company.

“Such offensive is systematically being done to weaken the struggle and unity of the communities. We condemn the Cambodian government for its subservience to China’s corporate interests at the expense of the rights and livelihood of its own people,” Longid said.

The mission cited the loss of livelihood, deprived access to food and clean water, and environmental degradation as among the grave effects in the area of Hengfu’s operations that started in 2011. It also mentioned that the Kui communities in particular are slowly losing their indigenous identity.

“The situation on the ground clearly belies the Cambodian government’s promise of development to the communities in Preah Vihear. If anything, what the government delivered was greater poverty and repression to its people,” said Roy Anunciacion, global coordinator of PCFS.

“We stand with the indigenous Kui peoples and all the affected communities in their call to cancel Hengfu’s economic land concession and to stop the plunder and further degradation of their lands,” said Longid.

Cheatlom Ang, PKH executive director, said, “There have been many accounts about the struggle of the people in Preah Vihear against Hengfu. However, this is the first to bravely recognize the violations to human rights and identify their perpetrators. We are glad that the international fact-finding mission pushed through despite the political situation here in Cambodia.”

Ang referred to the recently concluded national elections in July and the release of Cambodian opposition leader Kem Sokha from prison at the time the mission was being held.

The summary actually mentioned that two of its teams experienced harassment during the conduct of the mission.

Meanwhile, the PCFS denounced the “guilty”verdict early this month against four villagers of Stung Hav district, O’ Tres commune, Preah Sihanouk province who were sentenced a year in prison and fined USD 5,000 for allegedly destroying property and encroaching the disputed84-hectare land of the supposed owner businessman Tan Tap.

Khmer Times reported that six were arrested in May 2018 in relation with the land dispute, but the four of them –Luch Touch, Men Ken, Kao Heng and Nhanh Cheat – were charged and jailed since.The report also said the villagers will be spending two months more in jail,minus the time they have already served since their arrest.

“PCFS calls on the government to put a stop on criminalizing the assertion of communities of their right to land and to put a stop on the repression happening in Preah Sihanouk, Preah Vihear and other communities where land struggles and conflicts are taking place.Development should be people-centered,” Anunciacion stressed.

Anunciacion said PCFS is calling its members and networks to join the global day of action on Oct. 16, in light of World Hunger Day.

“This is an opportune event to send our message that chronic hunger will only be resolved through genuine agrarian reform and food sovereignty,” he said.

According to the PCFS global secretariat coordinator, the World Hunger Day was declared to counter the UN FAO’s World Food Day celebration. Globally coordinated protest actions will take place on this day. Local struggles involving large-scale land and resource grabs such as in Cambodia will be highlighted, criticizing the neoliberal policies that enable them and institutions including governments that endorse them.

“The rural peoples of the world will present our real situation: landless, food insecure, and hungry. Moreover,we will show that the rural people’s movement is very much alive and that our struggle for land, rights and social justice endures until the root causes of hunger and poverty are put to an end,” said Anunciacion. ###