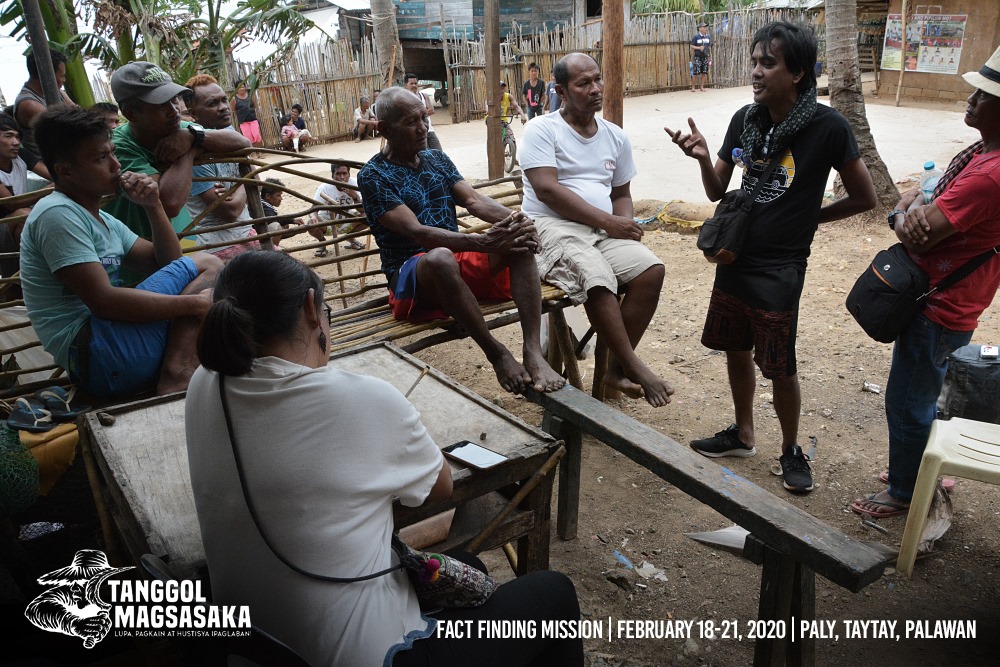 An international movement of grassroots groups of small food producers and food sovereignty advocates issued its concern on the economic and political repression experienced by small farmers and fisherfolks in the island province Palawan, west of the Philippines to expedite business interests.

“We condemn the use of starvation through imposed economic restrictions and the de facto martial rule under the guise of counter-insurgency that deprive them of food sovereignty to force their displacement,” said the People’s Coalition on Food Sovereignty (PCFS).

According to PCFS, the mainland farmers in the municipality of Taytay and the fisherfolks of the island barangay Paly are already on the brink of starvation as they endure militarization and livelihood constraints.

“We are alarmed that state actors are fronting the blatant violations to people’s right to food in Palawan,” the coalition said.

PCFS joined a fact-finding mission held Feb. 19 to 20, 2020 in response to reports of alleged state-sponsored rights abuses in Taytay, Palawan’s rural communities. The broad network Tanggol Magsasaka spearheaded the mission, which also comprised fisherfolk organization PAMALAKAYA and the Southern Tagalog region chapter of the Peasant Movement of the Philippines (KMP) – both members of PCFS.

According to the mission’s report, farmers in mainland Taytay and small fisherfolks of Paly are restricted from their farming and fishing activities due to standing land disputes and governing regulations such as the imposition of fishing seasons and fees. Investment corporation Guevent has grabbed 400 hectares in the mainland previously awarded to land reform beneficiaries for its bamboo plantation while various entities have staked claim over Paly island due to mining interests. The island is also rumored to be developed for ecotourism.

The report also highlighted the militarization of their rural communities and the malicious redtagging of people’s organizations through the provincial Task Force to End Local Communist Armed Conflicts (TF-ELCAC), which was done to weaken their opposition to these projects. Particularly hit were Pinagkaisang Lakas ng mga Okupante, Residente, Manggagawa, Magsasaka, at Mangingisda (PLORMM) in mainland Taytay and the local chapter of PAMALAKAYA in Paly for their alleged affiliation with communist rebel group New People’s Army.

Interviewed members from both organizations all shared a common experience of constant surveillance and harassment. They were also forced to surrender to “clear” their names. The redtagging has also resulted in discrimination, limiting the opportunities of affected locals in searching for alternative sources of income and extending to their children who are bullied in schools.

The report also mentioned that the mission experienced intimidation to delay and limit its activities.

“This ‘whole-of-nation’ approach has only been damaging to the welfare of the rural Palaweños. It is abused to crush legitimate organizations that exercise their rights to resist anti-people programs and policies,” said Eddie Billiones, spokesperson of Tanggol Magsasaka. He was referring to Executive Order No. 70, which formed the TF-ELCAC in all levels of governance to implement the intensified “counter-insurgency” program.

“It is such a shame and irony that Palawan’s farmers and fisherfolks are suffering from abject poverty while their governor is the richest elected official in the whole Philippines,” Billiones added. “The government can only resolve domestic armed conflict if it addresses rural poverty head-on through genuine agrarian reform.”

“This is happening in many rural areas in the Philippines and in other countries where state terror reigns. Government actors and state forces exploiting their authority to facilitate elite and corporate interests at the expense of the lives and livelihood of the rural peoples,” said PCFS.

PCFS is supporting the recommendations outlined in the mission’s report, including the review of all enabling policies behind the economic and political repression including EO 70 as well as the recognition of the legitimacy of the local people’s organizations.

“The situation in Palawan also attests the urgency for the United Nations Human Rights Council to intervene through an impartial investigation of the human rights situation in the Philippines,” the coalition added.

Various international groups have also expressed support to the campaign. A total of two global formations including PCFS, three regional, and seven national organizations from Asia, Africa, and West Asia-North Africa are endorsing a petition calling to defend the small fisherfolks of Palawan from the state terrorism happening in the country. ###