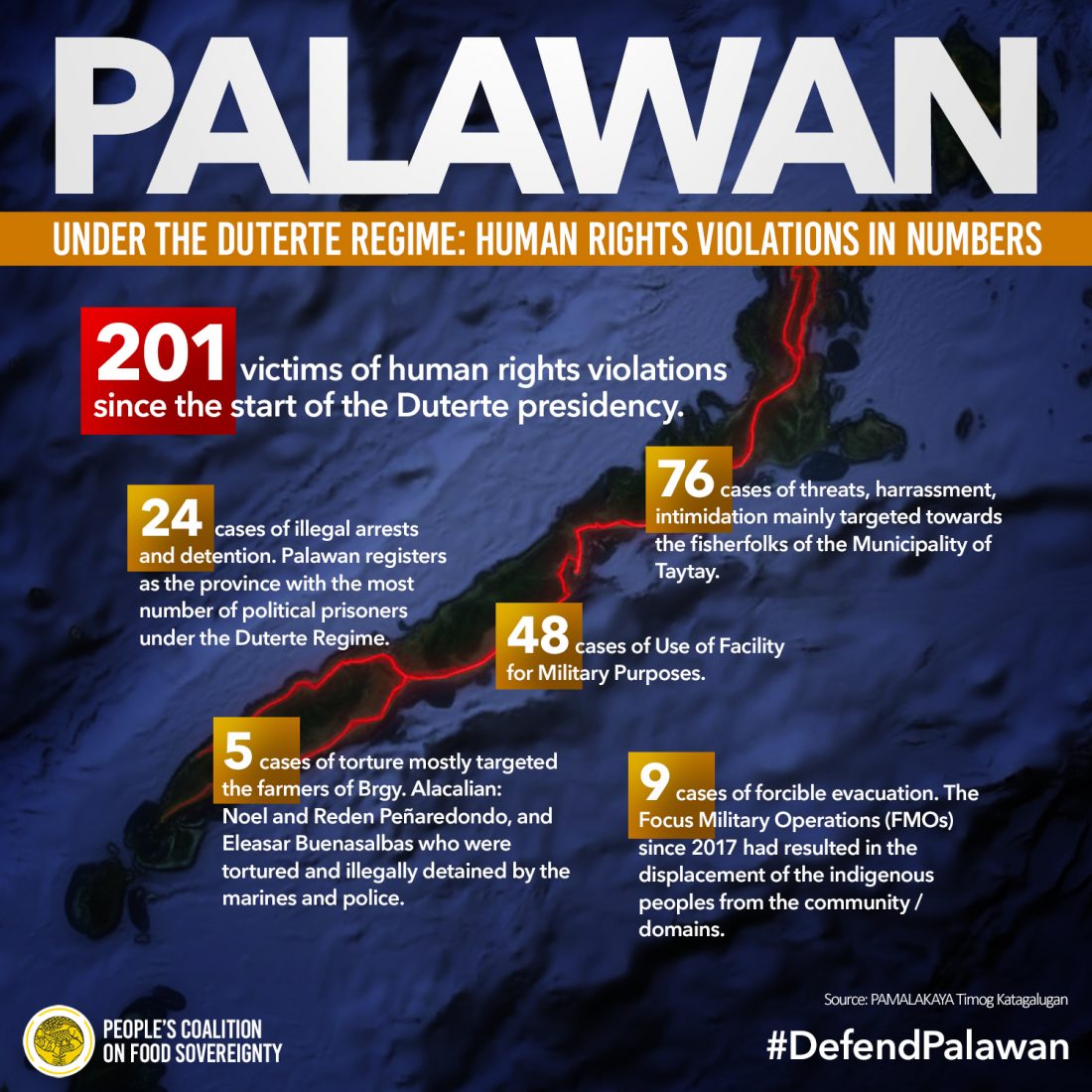 We, the undersigned, denounce the state terrorism being perpetrated in the island province of Palawan, west of the Philippines.

In the past year, state-sponsored human rights violations in Palawan’s rural communities spiked due to the vicious, systematic, and widespread redtagging of organized small fisherfolks and other rural peoples campaigning against development aggression. People’s organizations and their leaders are subjected to constant harassment and intimidation to curb their resistance on the premise of being linked to communist rebels – a baseless and fabricated accusation. Their members were also forced to surrender as rebel returnees.

Since President Rodrigo Duterte came into power in June 2016, local independent groups have documented a total of 201 victims of human rights violations in Palawan. Seventy-six of the victims are small fisherfolks from the town of Taytay, who have experienced threat, harassment, and intimidation. Five were tortured while 24 were illegally arrested and detained, including fisherfolk leader Norly Bernabe, president of Southern Tagalog region’s militant peasant federation Katipunan ng mga Samahang Magbubukid sa Timog Katagalugan (KASAMA-TK). There are also 48 recorded cases of using public facilities such as schools, churches, and town halls for military purposes and nine cases of forcible evacuation.

At the national level, political repression is being legalized under the guise of counter-insurgency while exhausting government resources and machinery. It facilitates the grabbing and destruction of the country’s rich natural resources to serve elite, corporate, and foreign interests. On the other hand, the rural peoples especially the small fisherfolks remain to be among the poorest sector in an archipelagic country such as the Philippines.

In Palawan, development aggression has resulted in the displacement of communities, loss of livelihood, and the reign of terror as lives are put to risk. Militarization disrupted the already depressed lives and livelihood of the small fisherfolks, restricting them access to the province’s biodiverse coasts and waters. Meanwhile, the coastal areas and islets are converted for the expansion of elite-owned eco-tourism businesses and pearl farming, as well as big-ticket Chinese investments like the Reed Bank joint gas and oil exploration deal. They are also being used as training ground for the joint military exercises of the Philippines and the United States.

As such, we join the call of the rural peoples and progressive groups in Palawan to junk the legal bases of the repression – the Joint Campaign Plan Kapanatagan, Executive Order No. 70, and the Whole of Nation Approach under the Retooled Community Support Program – that empower the local government and the military to wreak havoc in the communities. Legitimate people’s organizations should be delisted from the redtagging and machinery such as the Provincial Task Force-Ending Local Communist Armed Conflict should be dismantled. In addition, military troops of the 3rd Marine Brigade and the Western Command of the Armed Forces of the Philippines should be pulled out of the communities and perpetrators of human rights violations from their ranks should be held accountable.

We urge the national government to rechannel its funds for these anti-people programs toward resolving rural poverty through the promotion of people’s food sovereignty, which can ultimately address the domestic armed conflict.

We also implore the local government of Palawan to stand up for the interests and welfare of its people, instead of being an instrument to legitimize and enable the martial rule in the province. It should prioritize the development of its small fisherfolks and seek justice for the victims of human rights violations.

Lastly, we call upon the UN Human Rights Council to implement its resolution on the promotion and protection of human rights in the Philippines, which was adopted in July 2019 during the UNHRC’s 41st session. We look forward to the conduct of impartial investigations regarding the human rights situation in the country, which will provide respite for the Filipino people from the attacks and push for the end of the prevailing state terrorism. ###