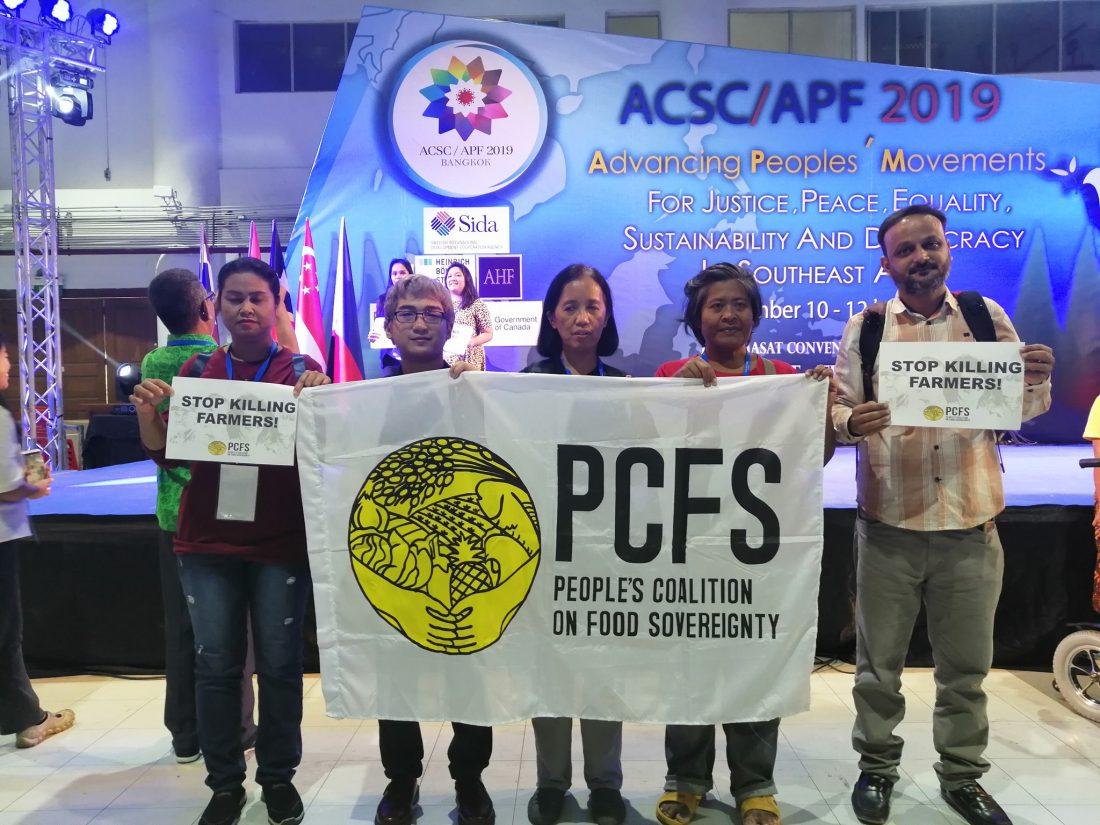 “We join the CSOs’ call and enjoin our allies to stand strongly for the right to freely organise, peaceably assemble, and discuss people’s concerns in the region, from corporate plunder of land and resources to extrajudicial killings. Attempts to compromise supposed democratic spaces endanger people’s voices, and confirms our concern over rising militarist authoritarianism,” said Jaz Lumang, Secretary-General of Asia Pacific Research Network (APRN).

The ACSC/APF has been organised with the theme, “Advancing Peoples’ Movements for Justice, Peace, Equality, Sustainability and Democracy in Southeast Asia.” A week prior to the APF opening, the Thai government has attempted to solicit names of CSO participants posing serious security concern.

“It is ever urgent to heed people’s demands, as we vigorously call to stop the attacks on rights defenders in the region particularly the Indigenous Peoples as they defend ancestral lands, indigenous knowledge, and sustainable alternatives against state-backed corporate interests,” said Beverly Longid, Global Coordinator of the International Indigenous Peoples’ Movement for Self-Determination and Liberation (IPMSDL). Longid added that militarisation of Lumad schools and communities in Mindanao, Philippines is aimed to suppress people’s resistance against planned corporate mining and plantation operations within their ancestral territories.

In response to the rampant crackdown on dissent all over the region, IPMSDL joined forces with the Asia Pacific Network for Environmental Defenders (APNED) and IBON International to co-lead a workshop titled In Defense of Rights Defenders: A Forum-Workshop on the State of Human Rights and Defenders in Southeast Asia on September 11, 2019 at 1:30 to 3:00 PM at Thammasat University Rangsit, under the Convergence Space on Human Rights, Democracy and Access to Justice. The workshop will feature speakers from FORUM-ASIA and Indigenous rights defenders from the West Papua and the Philippines. They will discuss the worsening human rights situation and continuing criminalisation of rights defenders.

Additionally, the People’s Coalition on Food Sovereignty (PCFS) is concerned about attacks on farmers. “Organisations and communities continue to assert food sovereignty and their right to till the land against land grabs facilitated by international finance institutions and corporate giants and repressive elite-led states. Increasingly, there are people’s assertions against land grabs of China-based firms and controversial hydroelectric dam projects in the Mekong sub-region, Indonesia, Malaysia, and Philippines,” according to Theng Saveoun of PCFS – Asia.

The coalition will be among the speakers at the Workshop on Investments in the Region on 11 September, 9:30 to 11:30 AM under the Convergence Space on Trade, Investment and Corporate Power.

PCFS is a member organization of POP. Representatives of PCFS are currently in Thailand to participate in the event.