Beyond housing: The urban poor occupy movement in PH 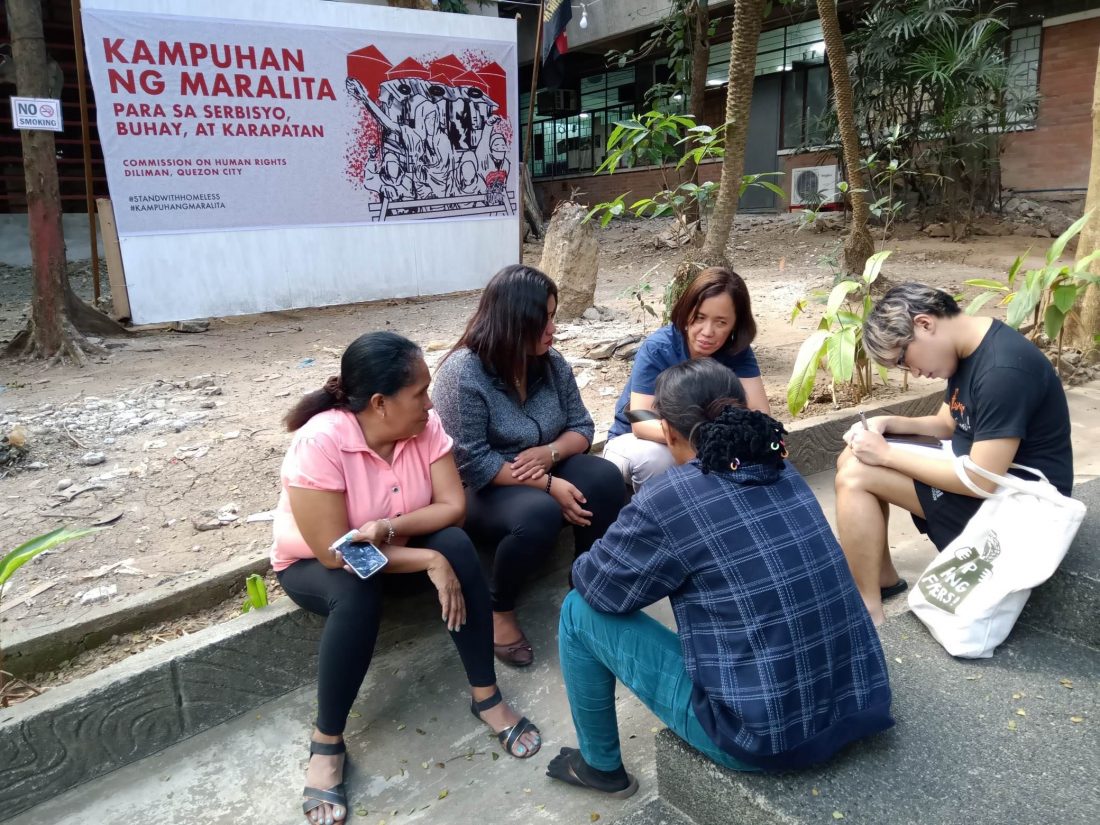 In March 2017, thousands of urban poor under the flag of Kalipunan ng Damayang Mahihirap (KADAMAY) led the occupation of vacant government shelters in Pandi, Bulacan province, Philippines. About three years later, KADAMAY is holding a protest camp amid state efforts to banish them from their occupied homes.

The protest camp, hosted by the Commission on Human Rights in Quezon City, is KADAMAY’s three-week campaign to advance their rights to affordable housing and social services while demanding accountability for the human rights violations they experience. According to the women community leaders of the landmark occupation, they faced continued harassment, threats, and vilification by the local and national government. They shared how the police, military, local government, and the national housing agency connive to divide the organization and drive them away back to homelessness.

“Before, they called us thieves. Now, they tag us as terrorists,” said Bea Guerrero, one of the occupy leaders interviewed by the People’s Coalition on Food Sovereignty (PCFS) during its visit to the protest camp last February 1, 2020. She said KADAMAY has been redtagged to justify the militarization of their communities, demolish the organization’s credibility, and dissuade members until they leave the group.

The local KADAMAY leaders shared how state forces and goons ransacked their office and burned their documents and other belongings in September last year. They have experienced constant surveillance and attacks such as the throwing of rocks to their houses and beating of their relatives. Community programs such as the daycare and livelihood projects were also disrupted.

Guerrero said community members are bribed to join the military-funded “pro-government” group led by breakaway leaders of KADAMAY. They are also persuaded to surrender as communist rebels in exchange of PHP 1,000 (USD 20) and a bag of groceries. Two of their youth leaders were also jailed on the same trumped-up charge while campaigning for a supported progressive candidate in the May 2019 senatorial elections.

“The big budget for state intelligence is being used to evict us from the shabby houses that the government left idled. These funds could have provided housing to the millions of homeless in the Philippines,” said Lea Maralit, another KADAMAY leader.

She was referring to the PHP 8 billion “surveillance funds” allotted from the national budget in 2020. Government data shows there are 4.5 million homeless people in the Philippines as of 2018.

The community leaders asserted that the occupation they did in March 2017 was legitimate. However, KADAMAY members are deliberately being excluded in the processes of the National Housing Authority (NHA) to legalize their ownership of the mass housing units in Pandi despite President Rodrigo Duterte’s order to facilitate the turnover of the shelters to the occupying families.

Maralit said the houses, which were supposed to be awarded to military personnel, were left bare and barren for years that the members themselves, upon occupation, had to make repairs – others even installing roofs to units without them – in order to make them habitable. Yet majority of them have no potable water and electricity. The NHA and the local government refuse to issue KADAMAY members the entry passes needed for them to have access to these utilities.

“From this [situation] we realized why KADAMAY’s cause goes beyond housing. Our fight against homelessness encompasses our right to decent living,” Maralit said.

The leaders said they are already reaping success from the protest camp. The NHA has started giving out the entry passes to families.

“The faith of the communities in the organization has propelled us to continue the struggle to realize the demands of the urban poor sector for affordable housing and decent livelihood in spite of the hardships of pioneering the occupy movement,” Guerrero said.